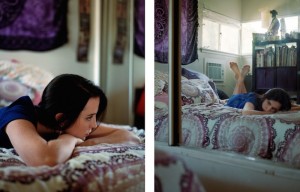 Emily Quinn is a 25-year-old animator who works at Cartoon Network. She is also ​intersex. For her this means that, while she has a perfectly normal-looking vagina, it’s not a uterus and ovaries she has inside—it’s a pair of testes.

Like the rainbow flag, there are many shades to being intersex. The term refers to people born with differences in their sex characteristics, which can occur in genes, chromosomes, genitalia, body hair, or reproductive organs.  ​Quinn—who doesn’t respond to the testosterone that is produced in her testes (her body turns it into estrogen for her)—reckons she represents about one in 20,000 births, with intersex people generally representing about ​one in every 2,000 in North America.

Click here to read the rest of the article featuring our own,  Emily Quinn.