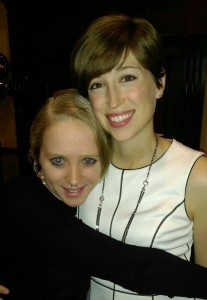 “The best and most beautiful things in the world cannot be seen or even touched – they must be felt with the heart.”

Hello everyone! So I was asked by our lovely AIS-DSD president, Georgiann Davis, and also Amber Jones, to write a summary of what my first AIS-DSD conference was like. Well I love writing, so it’s not going to be a summary it’s going to be pretty detailed, I hope that is ok. This conference was truly an eye opening, life changing experience to me so I have decided to be pretty detailed in giving specifics of my past.

Well I was born to two loving parents on August 24, 1992 at the Brigham and Women’s Hospital in Boston, MA. My parents were stationed in Maine at the time, and I was 2 months premature and there was no hospital at the time equipped for delivery of a baby that premature; so they put my mom in an ambulance for 2 hours to Brigham and Women’s in Boston.

*The following is based off of what I have learned from my medical records and what my parents have disclosed to me.

Upon delivery my mom says it was announced “it’s a girl”. Upon further examination however it was declared that I had ambiguous genitalia, and my karyotype read “46 XY male pseudohermephrodite”. I have had it vaguely explained to me that although my karyotype was male, I presented as a phenotypical female (except for my genitals). I also had undescended testes (gonads) in my abdomen.  My parents were told by all the highly educated Harvard Med Professors “that I would never feel like a boy, that I would always feel like a girl”. So within a couple days of my life I had a bilateral gonadectomy, removing the “possible cancerous” gonads from my infantile body.

I was assigned to Dr. Hardy Hendren at Boston Children’s Hospital, Chief of Surgury and very skilled at “treating” children with ambiguous genitalia. When I was 18 months old this Dr. Hendren and his team set out to make my body fit exactly how they thought it should be. They performed a complete vaginoplasty, taking parts of my bowel tissue and using it to make the lining of my vaginal canal. They made my clitoris into a “normal” size, and they formed the labia the way it should be. It wasn’t until after this great surgery that Dr. Hendren informed my parents they would have to preform vaginal dilation on me as child, to prevent the newly formed vagina from atrophying.

My childhood was mainly very happy; I have memories of going to Disney Land and Disney World with my family and my Grandparents. My dad is in the military so I got to travel a bit as a child. I always did know that I was different though; and I also have the 6 inch scar from my having my gonads removed which others girls didn’t have.  I knew my parents loved me – but included in all the lovely memories is also that of the painful vaginal dilation I went through as a child. I didn’t talk to any of the other girls about it at school, but I just knew it wasn’t right. It was like a big bad secret. Even a child knows not to expose themselves to a certain point, and when it is something like vaginal dilation and you don’t even know what it is for or why?? It did cause some sorrow for me, but like I said I was a happy child and didn’t let the sorrow overwhelm me.

We moved to Virginia in 2001 and my parents took me to Johns Hopkins to see an endocrinologist who soon started me on Hormone Replacement Therapy around the age of 11. When I was 12 years old I began participating in sports more and became more academically focused. I wanted to be good at something (which I later learn was me just trying to have control). I unfortunately developed an eating disorder and when I was 13 years I was hospitalized for the first time for it. A couple months later I was 14 years old and I was at the Johns Hopkins Eating Disorder Unit, and I was very ill – very physically sick and also emotionally not in a good place. I remember walking into the room where the treatment team did their rounds and the director of the program who is an attending Psychiatrist felt it pertinent to inform in a very narcissistic/ignorant manner that I had Androgen Insensitivity Syndrome.

She said “Marissa, you were born with a condition called Androgen Insensitivity Syndrome”, “Girls should have XX chromosomes, and boys have XY chromosomes, YOU have XY chromosomes Marissa”. She went on to tell me how rare AIS is, and all the usual uninformed doctor crap. This conversation scared the hell out of me. Up until then I had thought I was just a girl who couldn’t have babies, that was all that had really been told to me. I soon after learned of the word hermaphrodite which also terrified me at the time. I was utterly ashamed and I just wanted this to be the biggest secret of eternity.

I start identifying as a lesbian and start being more open about sexuality. It is at this time that I officially requested my medical records from Boston Children’s Hospital. Reading the medical records made me upset at the time but at this point I begin learning of the intersex community. I joined the Facebook group The Commons and AIS Support Group in 2012 approximately and was thrilled to learn I was not alone! I also typed in AIS on YouTube and one of the first videos I saw was an ABC News video featuring our very own Eden Atwood!!!!! <3 I was completely blown away at Eden’s strength to get on the news and talk about this so publicly.

Last fall approximately I met my current Psychiatrist who is the best Psychiatrist I have ever had. She is the first ever Psychiatrist to tell me what I went through as a child was a form of trauma, and that my eating disorder and depression was a way of me trying to suppress and cope with the pain I experienced. Well she is just lovely. It was also around this time that I watched the Oprah Winfrey Show on YouTube featuring some of our Orchid Family, Katie Baratz-Dalke being one of themJ. After I finished watching the show, I looked Katie up on Facebook and I added her! And over the last couple months she has really been a special person in my life; always giving me positive words when I need them, standing as that positive role model for me, and I think most importantly reminding me that having AIS or and DSD is nothing to be ashamed of. It shouldn’t be a secret like I kept it for so many years.

I was talking to Lynnell Stephani Long one day on Facebook, and she asked if I was going to the upcoming conference. I said no because I didn’t have the money. Well Lynnell being as amazing as Lynnell is got me a last minute scholarship to the conference; I just had to find a flight! So despite some troubles at the airport in Philadelphia I finally made it to the conference (thanks to awesome fellow conference members). I arrived at the hotel and I immediately just felt a sense of peace and love. Lynnell came up to me and gave me a hug; I thanked her for getting me there on the scholarship. When I walked into the hotel I just saw so many familiar faces – Georgiann, Eden, and Arlene Baratz! Arlene was talking to a group of people and I had never met her in person but all I wanted to do was go up to her and give her a big hug! I decided to officially introduce myself later on though. That big hug is coming next year though Mama Orchid! I met my awesome roommates; although I hardly spent any time in my room I was constantly having so much fun.

The conference was just completely outstanding to me, I had no idea we had lawyers, LAWYERS advocating for us. Like that is so awesome!! I think one of the most eye opening experiences for me was Friday night I was having my first official drink/cocktail at a bar (yay me) with approximately 3 Doctors, and I was just thinking…I am just another person here, I am not being judged on my accomplishments, what I look like, or what my past has been. I truly felt loved and appreciated for who I was. It was awesome being able to give everyone a million hugs all the time, hugs are awesome. I also loved the gender fluid share group, where I was able to share a bit of my story and also listen to others.

Karaoke was one of my other top 3 favorite events. I liked being able to dance however I wanted without anyone judging me based on how I was dancing. Seeing everyone together just having a great time was really what I liked the best. I would literally feel the love, the warmth in the room. My other favorite event was the Orchid Awards on Saturday night. I had no idea how long people like Dr. Quigley and Arlene have been dedicated to the AIS-DSD Support Group. It really made me happy to be able to dress up for something I felt like deserved being dressed up for. For me this was way more important than any high school dance/ prom I didn’t go to anyway. Having a 3-4 course meal was pretty awesome; I really enjoyed that, and having it with my Orchid Family. Saturday night ended with me Katie and a group of other people heading over to the bar and Mark Baratz bought all 10-15 of us a shot of tequila! That was amazing! Then I just got to hang out and get some pictures with my newly formed Orchid Family. These memories will truly last a life time. I truly aspire to make a difference in the AIS-DSD SG community and maybe writing this was a first step.

In closing I would just like to say that my first conference has taught me not to be ashamed of being intersex, but in fact to embrace it. I have actually received several messages from people on Facebook telling me how brave they think I am for coming out as intersex on Facebook. I am proud of it now, so why not? I hope this wasn’t too long! I love my Orchid Family! <3