In the Season 2 premiere of MTV’s Faking It, which explores the spectrum of sexuality, a main character reveals that she was born with an intersex condition. Here’s what went into that decision — and why it was so important to get it right. WARNING: This post contains spoilers about the Faking It Season 2 premiere. 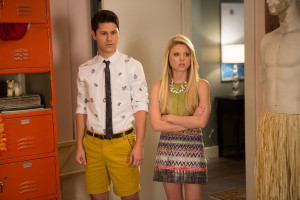 Shortly after the reveal that Lauren (Bailey De Young) was born intersex on the Season 2 premiere of MTV’s Faking It, her stepsister Amy (Rita Volk) asks a question that will likely be on many viewers’ minds: “What exactly does ‘intersex’ mean?”

“It means it’s none of your fucking business,” Lauren snaps, before fleeing the room.

In terms of accepting her identity as a woman with an intersex condition, Lauren has a long way to go. But on a larger scale, Faking It — a show that already features openly queer and questioning characters — is breaking new ground simply by making one of its regulars intersex. Though still in the beginning stages, Lauren’s storyline is a major step forward in intersex representation.

Intersex is not a rare condition, but it is largely invisible. According to Kimberly Zieselman, the executive director of Advocates for Informed Choice, about one in 2,000 babies is born with an intersex condition, of which there are more than 30.

And, like Lauren, Zieselman was born with a genetic intersex condition called Androgen Insensitivity Syndrome. “Women like myself with complete [AIS] are born with XY chromosomes, or typically male chromosomes, and internal testes, but no uterus — no uterus and no reproductive organs,” Zieselman told BuzzFeed News via phone. “We’re born kind of male on the inside, but typically, on the outside, look very female. I think that fits Lauren’s character well, and speaks to some of the things that the writers wanted to do with her character.”

Insight Into the Lives of the Intersexed I’m Emily Quinn, And I’m Intersex