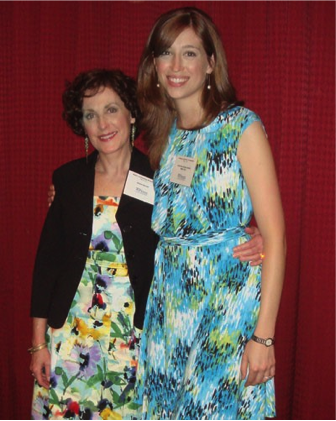 A mother of two intersex daughters tells parents how to deal.

Is it a boy or a girl? If your baby is born with ambiguous genitalia, your doctor might not be able to tell you right away. But don’t expect to hear the term “hermaphrodite” — the new name is “Disorders of Sex Development” (or DSD for short). Children with DSDs have atypical sex chromosomes, gonads (ovaries and/or testes, or unusually developed genitalia, and one in 2,000 children are affected.

Dr. Arlene Baratz is a physician, DSD advocate, and the mother of two grown daughters affected by androgen insensitivity syndrome — a DSD in which a child has XY chromosomes and testes, but her body is immune to male hormones so she develops and grows up as a girl. Dr. Baratz’s work with the Androgen Insensitivity Syndrome/ Disorders of Sex Development Parent Support Group (AIS/DSD Parents) landed her and her older daughter Katie on Oprah, where they discussed va-jay-jays and growing up intersexed. They will soon be appearing on the OWN on the BBC documentary The Truth of My Sex.

She is also a family and medical adviser for the boards of Advocates for Informed Choice, which provides legal advocacy for children with DSD, and for Accord Alliance, a convenor of DSD stakeholders.  Dr. Baratz talked to Babble about raising two DSD kids, what determines if you’re a boy or a girl, and how to get your kids to love the bodies they’re in. — Meghan Pleitcha

When your daughters were born were you already familiar with DSDs?

We had a lecture on what were called “intersex conditions” when I was a medical student, and I remember learning about AIS, which is the abbreviation for Androgen Insensitivity Syndrome. We did not learn about our daughters’ AIS when they were born. We found out when our older daughter Katie had surgery to repair a hernia when she was six, and luckily we had a wonderful pediatric surgeon who operated on her, and he was thoughtful enough to check and see if there was a testis in the hernia. In one percent of girls who have an inguinal hernia in the groin, the cause is AIS. And because it can run in families, he suggested that our other daughter be checked. She was four and Katie was six when we discovered they both had AIS.

Wow. What kind of reactions and advice did you get?

Well our medical experience was actually excellent. We had a professor of pediatric endocrinology from medical school who became our physician, and he was very supportive and helpful and told us the girls would be healthy and completely female. He was not so knowledgeable about what happened to these children when they became adults. So I always had questions about that, and I wanted to meet other families who were dealing with a similar situation but he couldn’t introduce me to any other families. Which was lonely and tough.

Do you think that’s a common experience among parents when their children are diagnosed?

Yes. I’m a member of a group that has about 150 families and our name is the AIS-DSD Parents Support Group. And the vast majority of these parents have never met or spoken to someone else who’s in the same situation before they join the group.

So when then did you begin to talk about DSDs with your two daughters? Was it immediately after the diagnosis? How did that go?

I did start talking to them right away. I wanted to make things positive for them; I thought that they should have the expectation that they would have families if they chose to by adoption, so I really tried to focus on healthy things about different kinds of families, and just in general on ways to feel good about themselves.

How do very young children process information about their bodies?

Very young children – toddlers — have questions, but they accept differences. If a child says, “Why does my private look different from somebody else’s?” and you say to them, “Well you know some people’s private parts just look different from others,” they can accept that. And they’re very concrete, they don’t require a lot of explanation at that point.

If they perceive that there’s something negative about their genitalia or something else about themselves, they can absorb that. So it’s important not to dwell on it, to just talk about it as things come up so that they can develop their self-identity as they get to the pre-k years. They’re also developing their gender identity at that age, and they’ll have their parents as role models, and I think you just have to be very matter-of-fact about it: some people are this way, some people are that way, you are different, we love you, let’s have dinner.

So going off that, what would you say is the most important piece of advice for parents whose children have DSD? Is there a rule number one they should follow?

Just love, love, love your child. Be open. You know, you’re setting the tone for the rest of your child’s life and if your family is open and accepting, then your child will grow up knowing that he or she is accepted, that having a DSD is not a big deal, that it’s just something that is, and it’s fine. I do have one piece of advice: You have to be your child’s advocate. You have to go with your own gut feeling of what is right, because doctors don’t necessarily have a lot of experience with this, and a lot of times the parent knows better than the caregiver.

Is there a relationship between DSDs, gender and sexual orientation?

People like to focus on that, and it becomes a big concern for parents, but there really is not. There are very few people who don’t feel as if they are male or female, regardless of what else is going on with them medically or physically. Babies and children with DSDs will all get a sex assignment of boy or girl. The assignment will be based on how the parents and a team of clinicians thinks the child will grow up to feel as an adult. In the vast majority of cases, a thoughtful assignment is correct. Very rarely, the child may choose to make a gender transition.

How is that gender assignment determined?

The considerations are the appearance of the genitals and what gonads the child has, and what kind of hormones those gonads are making. A girl with AIS is a girl even if she has XY chromosomes and testes- there’s no way she could be anything else! You know if a fetus’s brain is exposed to male hormones, there’s going to be some sort of masculinization of the brain. And you want to think about that. You cannot just make a boy into a girl; that was a mistake that was made not that long ago. You know if a doctor looked at a baby that was XY, had a small penis and testes, that doctor would say “That penis is too small to have penetrative intercourse, this is not a boy.” And doctors would try to surgically create female genitalia and remove the testes and give them estrogen, but those children did not feel like they were girls necessarily. And after this drastic intervention, parents were advised never to tell them what had happened. And those were the children who grew up and never felt that things were right and felt like strangers in their own bodies.

At one point didn’t they have a phallometer that they use to measure the phallus, and if it was a certain length it was a boy, and if what less than that it was a girl?

What do you think is a common mistake people make when discussing DSDs would be?

I think that they think those children are transsexual or transgender — I should say transgender or that they’re the wrong gender. Everybody wants to make it about gender when it’s not about gender at all. That’s the problem that we really have, it’s just about being a different kind of a person.

Of course, we have to ask: what was it like being on Oprah?

Wow. She’s fabulous. She’s very kind. Oprah’s kind of a high priestess in our culture. If Oprah says it’s okay, it’s okay. And for her to say, “Look, we have to think about these people and accept them,” it really opens a lot of eyes. And I think that people in the community of parents whose children are affected by DSDs— you’re always worried about your child’s privacy, you always want to protect your child, and to know that this is on national TV, and millions and millions of people saw it and how they see young adults with a DSD, and for them to see that she is a great kid, has been very freeing.