A PowerPoint on the history of the AIS-DSD Support group is available at this bottom of the page. Presented at the 2014 national conference in San Francisco, it is available for your information. If you download and use it, please credit the author, Dr. Charmian Quigley.

Sometime in 1995 Sherri Groveman, an inspirational woman with complete androgen insensitivity syndrome (later, Sherri Groveman-Morris) found her emotional home in the Androgen Insensitivity Syndrome Support Group of the United Kingdom (AISSG; www.aissg.org). In a letter to me in 1996 Sherri explained that she had discovered the existence of the group referenced in the footnote to an article in the British Medical Journal. She shared with me the incredible thrill she experienced “to realize there was support after feeling alone on the planet for 36 years.” Having discovered the existence of the British group, Sherri traveled to England three times in that year to attend support group meetings and present the patient’s perspective at a British medical meeting. Buoyed by this experience, Sherri founded the North American branch of the AISSG and began developing its inaugural meeting for the following year.

As part of her planning Sherri contacted me in early 1996 to invite me to participate in the initial North American AISSG meeting. Email was not yet a standard form of communication, so her contact came to me by regular “snail mail” as a typed letter on light yellow paper, accompanied by a number of copies of “ALIAS” – a comprehensive newsletter published by the AISSG in the UK. In that very first letter to me (that I still have, many years later) Sherri stated “It is the culmination of my life’s dream to have others with whom to share my thoughts and feelings about having AIS.”

That initial letter began a friendship and a correspondence that soon moved from paper to electrons as email began to infiltrate our lives. Many a frank discussion was typed across the ether late at night between Indiana and California. I learned an enormous amount from Sherri, who was zealous about helping as many people as she possibly could, to love and accept themselves in ways she had been unable to do until she found the UK group.

A few months later, in an effort to spread the word about the existence of AISSG, Sherri sent me a box of AISSG trifold “factsheets” to distribute at the annual meeting of the Lawson Wilkins Pediatric Endocrine Society (now known as the Pediatric Endocrine Society) in Washington, DC. So, on May 4, 1996 at the conclusion of a lecture by one of the forefathers of androgen receptor research, Dr. Jean Wilson, I announced the existence of the North American branch of AISSG to the pediatric endocrine community and shared the brochures with the meeting attendees.

The inaugural meeting of the North American branch of the AISSG was held in New York City on September 7, 1996. I felt extraordinarily honored to have been invited to attend, as the only medical professional among a group of women with AIS and other differences affecting sex or reproductive development. We met outside a university in Manhattan and were led upstairs by a security guard to a small meeting room that seemed dark and enclosed. We sat in a circle and I listened with a sense of guilt and responsibility to the deeply moving, heart-wrenching stories of 20 women who, for the first time in their lives, felt safe enough to share the intensely personal feelings they had kept hidden for decades under a shroud of shame and secrecy. My sense of sadness and responsibility stemmed from the fact that much of these women’s pain resulted from well-meaning but misguided efforts of medical professionals to hide the “truth” of their condition from them. But the meeting also had times of great fun and joy. I distinctly remember a boat ride full of giggles on the Hudson River with (at that time) the largest group of women with AIS and related conditions to have ever assembled in the same place on North American soil (or water).

After that first inspirational meeting, the group continued to grow, mainly by word of mouth and some referrals from physicians who had learned of the group through the newsletter that was circulated broadly. From the outset, although the group was formed as an extension of the original UK-based AISSG, the intent was always to be broadly inclusive of any woman with a variation in sex development, so women (and family members) with 5-alpha reductase deficiency, Swyer syndrome, Mayer-Rokitansky-Küster-Hauser syndrome or undiagnosed conditions were welcomed with open arms. By 1997, there were 75 affected individuals and parents involved with the group, and the second annual meeting of what was by then “AISSG-USA” was held in San Diego. In that year, Sherri was joined by information technology guru, Donna L., to help with the logistics and support of new members with phone calls and mailing of printed information.

After the continued growth and highly successful meetings in Chicago, IL (1998), and Seattle, WA (1999), Sherri began the process of developing a Board of Directors to guide the future of the group. In 1999, Sherri stepped down from her role as the leader of the group to take a well-earned break, but remained as a member of the Board of Directors until the turn of the millennium, when AISSG became incorporated in the state of Illinois and eventually achieved official 501(c)(3) registered non-profit status. Thereafter, Donna L. led the group for a number of years, implementing the concept of regional meetings for women and families unable to travel to the national meeting. With the growing availability of the internet, supported by Donna’s tech-savvy skills, a listserv for affected adults was created by several enterprising members; that online community has grown and evolved considerably over the years and now includes members from all over the world.

The progress and impact of the support group was strengthened by the arrival of Arlene B., mother of two young women with complete AIS, who attended her first AISSG meeting in Boston in 2000. As a parent, Arlene felt the need for a dedicated place for parents of affected children to express their fears and concerns and to ask questions of other parents. This led to the formation of the AISSG parents’ email circle and Yahoo group, which now includes several hundred parent members from around North America and the rest of the world whose children have a broad constellation of conditions that affect genital and/or reproductive tract development. The parents’ email circle is a safe place for parents to share their experiences and concerns, regardless of the child’s diagnosis or gender of rearing. Arlene and Coleen B., also mother of a young woman with complete AIS, along with other dedicated parents, provide a constant source of support for families of affected children, teens and young adults. 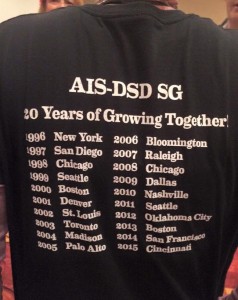 The 2006 AISSG conference in Bloomington, IN, was a turning point for the support group, with its innovation of concurrent tracks of programming designed specifically for teens and young adults and separately for parents. Many of the innovations that trace their genesis back to Bloomington quickly gained momentum and are now part of every conference. Our 2006 conference planner, Cindy S., also took on the task of creating the first website for the North American branch of AISSG (by then “AISSG-USA”), a labor of love, to be sure. In addition, Katie B., Miriam M. and other members of the energetic “new guard,” went to work creating an online community specifically for teens and young adults.

The 2010 conference in Nashville saw the introduction of a medical education program (later to become a formally accredited Continuing Medical Education [CME] event) for medical professionals, held on the day before the main conference. Like the conference itself, the annual medical/professional education program has grown substantially in size and scope, and is now a critically important part of the conference planning process, providing a direct and productive way for the support group to fulfill its mission to encourage improvements in medical education and standards of care for individuals and families living with variations and differences of sex development.

Another significant change began in 2010: after many years as the “AISSG-USA”, the leadership of the group, recognizing the increasing diversity of its members, recommended considering a name change for the group. The membership was surveyed with a number of potential options, and eventually the name “Androgen Insensitivity Syndrome-Disorders of Sex Development Support Group for Women and Families” was selected. The revised name of the support group was announced with the launch of the updated website in 2011. But, to be clear, the name change reflected not a change in the mission of the support group, but rather, a reaffirmation of the long-held goals of providing support to individuals and families living with a broad spectrum of differences of sex development. In 2013, the group opened its arms wider to invite participation of boys and men, initiating a specific track of programming and sharing for them at the Boston meeting. Recognizing again its increased constituency, the group has further modified its name, and as of 2014 is now the Androgen Insensitivity Syndrome-Disorders of Sex Development Support Group (AIS-DSD SG).

Although the AIS-DSD SG provides a great deal of support and advocacy in addition to its important annual meetings, we nevertheless track our history via these meetings, so the full list of locations of our 19 annual meetings (as of July 2014) is provided below:

The support group now offers community and camaraderie for affected adults, parents, teens and young adults from North America and around the world in Yahoo Health Groups and now also has several private pages on Facebook. Plans are in effect for moving all communities to a new private forum for more connection opportunities. The new forum will begin November, 2015 and replace all Facebook pages and yahoo email groups by January 1, 2016. More information coming soon!

Year after year an amazing group of individuals steps forward as the Board of Directors, to take on the task of guiding the growth and development of the group. Each year, the annual conference breaks new ground, expands programming, becomes more inclusive, tackles new topics, promotes new alliances, and offers more options and greater opportunity for connection and community. 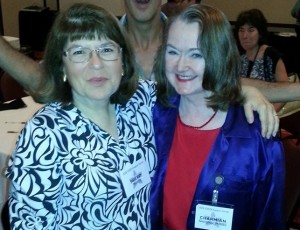 by Charmian A. Quigley